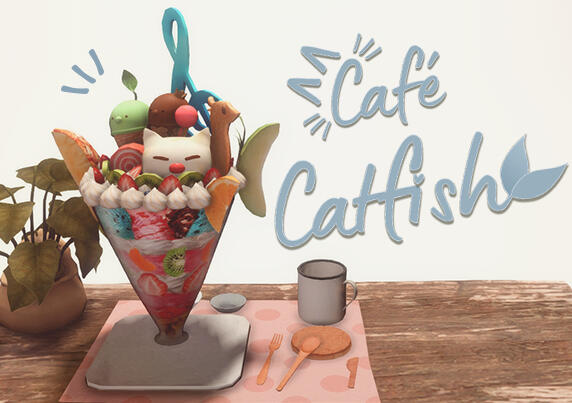 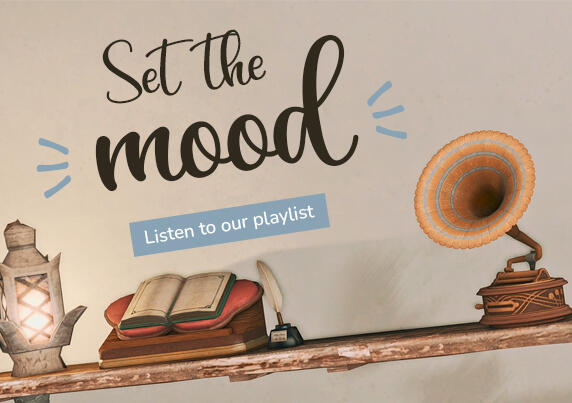 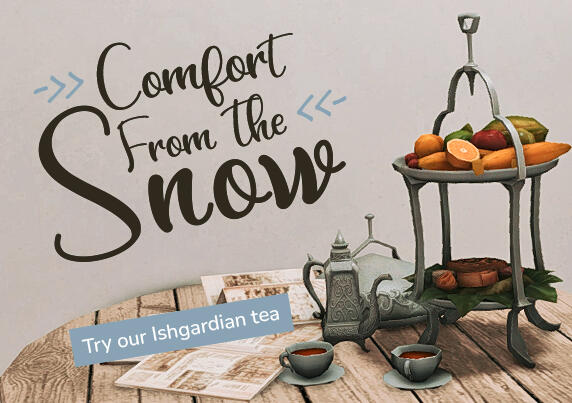 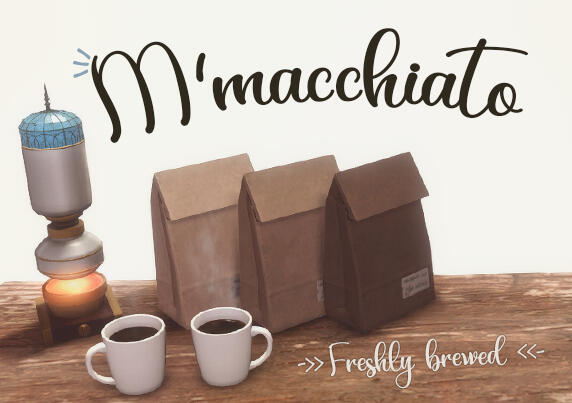 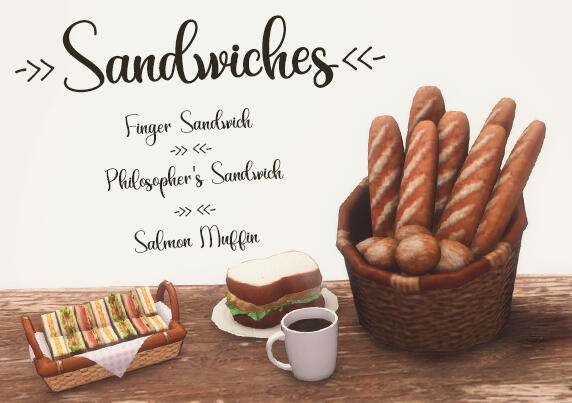 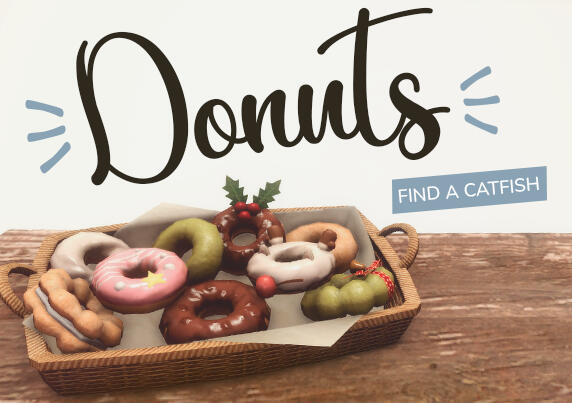 A DRINK FOR EVERY SITUATION

No matter who you are or where you are in life, we at Cafe Catfish
firmly believe that there is power in a cup of hot coffee.Whether you share your ups and downs with a friend or come alone,
our baristas will have the perfect cup to celebrate your victories, or soothe your pain.But life is more than coffee. Perhaps you are more of a tea person?
Or maybe your day can't feel complete without a cup of hot chocolate?To celebrate how different each and every one of us is,
we have carefully curated our menu so that everyone will find something for them.What will you have today?
Check out our menu here

Every story has a beginning

The beginning of our story begins in the outskirts of Limsa Lominsa,
where the now CEO Nova Celestia set up a small quiant café on the seaside.As the reputation of the café began to grow, Nova realized she needed help,
and help came in the form of the now VP Mono Leonie. They started hiring based on
personality rather than qualifications, "Baking and making coffee can be taught,
instead we sought people with that little extra something" said Nova.This bold move paid off and soon the Café was known far and wide for it's
atmosphere and eccentric cast of staff. The popularity grew so much that the
small cafe was no longer enough, and thus with the help of one of the
esteemed houses of Ishgard did a second location open up,Now the story goes on with each and every one of you, but one thing that
will always remain is the importance of a good cup of coffee, lively staff, and
the relaxing atmosphere we started with.

Fair trade is our only trade

At Café Catfish, we take full responsibility that our coffee is sustainable,
from the farmers, all the way to your cup. To ensure that our coffee and ingredients
are fair - both to the planet and the workers, we are proud to partner with
organizations and companies such as Sprout for Sprouts, Gaelicat Fairtrade and
KWEH Delivery among others.With a coffee from Café Catfish, you can be sure that everything
from planting to your mouth has you, the workers, and the planet in mind.
All you need to do is sit back, relax and enjoy a fair cup of coffee. 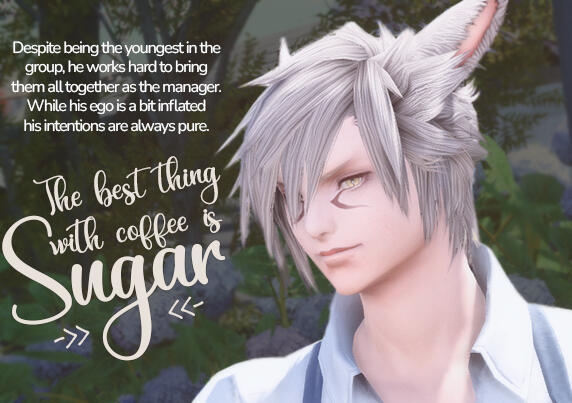 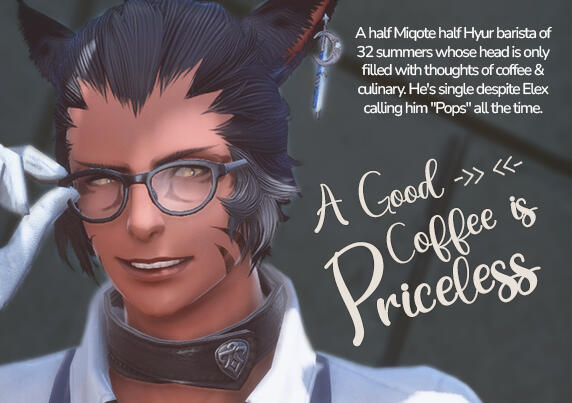 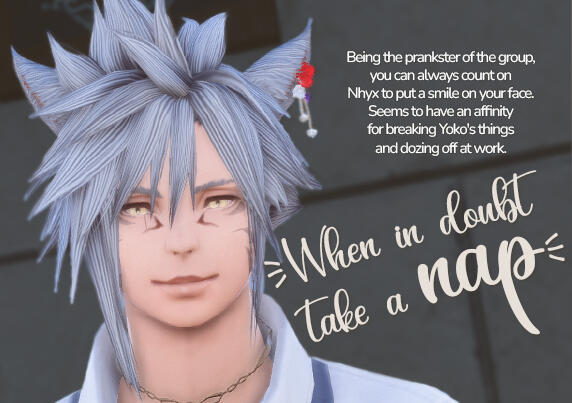 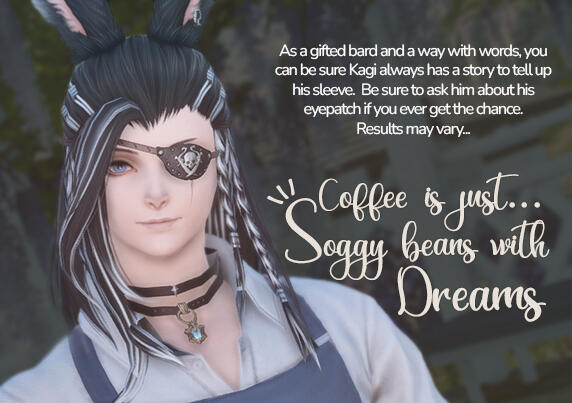 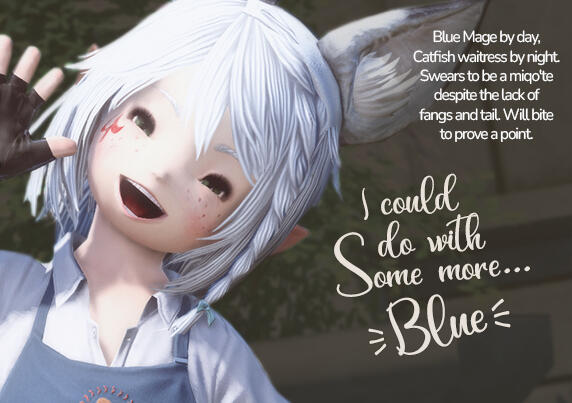 It is important to us that everyone feels welcome and accepted
for who they are at our venue. We have zero-tolerance for hateful
and/or inappropriate behaviour.Common sense and Final Fantasy XIV TOS apply.
Our venue is SFWStaff are identified with the LFP (Looking for Party) logo and will speak in yell.
Please refrain from using these yourself to avoid confusion.To order, please speak to the staff operating the counter.
We do not take table reservations or wait tables.If you have any questions, concerns or suggestions, please
reach out to any of our staff via /tell.

Our menu is carefully curated so that everyone will find something.Looking for something sweet? Try our tarts and pastries.
In the mood for something savoury? Try our Salmon Sandwich!No matter if you like your drinks hot or cold, we are confident
that we have something for everyone.What will you have today?
Check out our selections to the left!

All across the realm

Everyone deserves a good cup of coffee and to that end,
Café Catfish will now set forth towards Ishgard.Each new location celebrates the origins of Café Catfish,
but also pays tribute to the local specialties, you may find that each
cafe has something unique to offer. We are ever on the lookout
to expand so keep your eyes peeled if we come to your local area!

Please note that events will only be held at our plot in Ishgard.
Any other locations are mentioned for lore reasons only.
.

In the outskirts of Limsa Lominsa lies the heart, and beginning of Café Catfish.
This quaint little café on the seaside first opened its doors in 2020, marking the
start of a long and fun journey for staff and customers alike.Unique to this location is the homecooked style of fresh foods, especially the fish
sourced from the open seas outside Limsa Lominsa.

Please note that events will no longer be held here.
Instead, we invite you to our new chapter in Ishgard, Empyreum W9-P60!


Check out the gallery!

A bit over one year after opening our doors in Limsa Lominsa & with a
bit of help from good friends, the Empyreum location first opened it's doors
in April 2022. While still maintaining the atmosphere the customers had
come to love, the decoration now invites to function as a social gathering point
for locals and the growing tourism alike.Unique to this location is the wide variety of sweets and comforting drinks,
satisfying the palette of nobility and common folk both.

Check out the gallery!

When visiting any of our sites, you automatically become a member of
Club Catfish. And the best part? It's completely FREE!No membership cards needed, no stamp cards, just a lot of benefits and fun!
As a member of Club Catfish you can join in on any of our games
and win wonderful prizes ranging between free desserts, minions, and sometimes
brand new clothing or trusty mounts.Please read up on some of the games we have to offer and come and play!On special occasions we also hold raffles with extra spicy prices!
Follow the instructions given by the staff during the venue when a raffle is being held.

Usually the café offers a cozy and relaxing atmosphere for adventurers
to kick back and enjoy a moment of quiet. And sometimes the staff shoot guns at
each other in a game left to luck?! Enter for a chance to win minions!

2 staff members will each pick a side of the caféThe staff will then battle it out using /random, the highest roll winsYou participate by standing with the staff member you think will winIf your pick wins, you move on to the next round and get to choose a side againHowever, if your side loses, please sit down and try your luck again another timeThe game continues until we have a single winner left

Elex is always looking for an excuse to share his passion for tarts and has
even come up with a game where you have a chance of
winning this delectable dessert. Somehow he manages to always
carry around a set of Jenga in his pockets?

2 players will take turns doing /random 30If someone rolls a single digit, the tower collapses and that player losesThe loser is legally obliged to provide the winner with either a tart or a headpat

Claming to be the next best beholder of the future since Yoko Tarot, M'lem
offers his services of reading your fortune while wasting beans.Get advice on matter of love, money and and everything inbetween.Café Catfish takes no responsibility for any bad readings.

Play a game of luck with M'lem when he's not busy at the counter.
If you win you get to keep one of the many prizes he seems to always carry.M'lem starts the game by placing a coffee bean under one of 3 empty cups
and rolling /random 3.The player will have 3 tries to roll the same number as M'lem using /random 3

Is your Triple Triad deck so impressive sailors mistake it for the Enterprise?Feel free to challenge staff and customers to a friendly match
of the popular card game Triple Triad.
Communicate which ruleset you wish to play with and, if any, prizes
should be on the line!Staff currently available to be challenged:M'lem, Nhyx, Kagi, Gazde